- So today I made it down to Noble's Pizza Pie Parlor for a solo lunch. I was downtown doing some errands, and was on this west of downtown, so figured it was perfect. I'm a pizza guy, I love the stuff every so often, and it doesn't put a pound on me weight-wise, and I am spoiled by having several amazing pizza joints within a 4-minute walk. 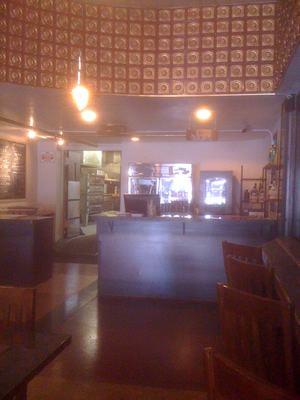 I did not get a chance to eat at Saigon Pearl so I don't know what the interior resembled previously, but I like the interior of Noble's.

It was a little dark but what restaurant isn't these days, plus the location only has windows in the front of the restaurant. Cool art work covers the walls, and in the front space there is a large 55" LCD TV, game console and some very comfortable looking couches. Towards the back of Noble Pizza there is bar-style seating on the right-hand wall and traditional tables on the left side. Ordering was easy and the staff was attentive.

They sell whole pizzas or pizzas by the slice, and even the pizza by the slice is made to order, so any worries about food collecting dust under hot lamps for hours can be put to rest. I ordered a slice of pepperoni pizza for $3.25. A slice of cheese pizza is $3 and a two-topping+cheese slice is $3.50

All meats are sliced fresh daily and the sauce and dough are vegan-friendly.

While I waited for my order I checked some of the other pizza options. High quality meats include pepperoni, handmade sausage, prosciutto, d'orro salami, handmade meatballs and rotisserie chicken. Available toppings include the standard fare plus arugala, caramelized onion, crimini mush, saute mush, aged pecorino, chevre, and aged provolone.

This is a pizza joint straight-up. I didn't see any sandwiches on the menu, or strange hybrid pizza-concoctions like pasta bowls (yeah I have my finger pointed at you, Domino's) or 20 different kinds of crust, etc

When my slice of pizza arrived I had to do a double-take at the size. These pizza slices are massive (see photo below of a slice of pizza next to an 8.5x11 menu) and it arrived piping hot right out of the oven. I had to let it cool down a bit before tasting it. It was delicious. Crispy but still-bendable crust is total New York style. The pizza was not overpowered by grease either, I didn't feel like I was ingesting a tub of lard with my slice of pizza. The pepperoni slices were large, so large they could only fit 4 on my slice, which was perfect.

I will definitely be coming back here.

Post your comments
Posted by: Justin - 9/3/2010 10:18:22 PM
Great writeup/review. I can't wait to drop by and give them a try. I agree on their signage, I almost missed it while driving by today. I really like that they offer some less mainstream pizza toppings.

Posted by: Blake Crosby - 9/6/2010 11:52:21 AM
Pie Face is an extraordinary accomplishment for Reno. I'd debate whether a crispy crust that's bendable is true NY style. Most places, the crust isn't crispy at all which is the way I like it, but Pie Face's amazing assortment of toppings makes up for it. I know you're not a food reviewer but you gotta try more than just pepperoni. That's like going to an Italian restaurant and ordering spaghetti. I love the fact that it's open until 6 AM after Friday and Saturday nights. There's a big niche for late night foodies, and any taco truck with half a brain would park theirs right at W 2nd St and West St at 2 AM to 5 AM. I'm not big into sausages so Calvin's truck doesn't do it for me. Also, it's not just pizza on the menu, they got calzones and little bread balls or something. 2 small suggestions though. More bar seats, and make it a hybrid bar/pizza place. You may need an extra clerk and cash register, cause it can get busy in there. Okay 3 suggestions. Third is a restroom, then people would hang out longer to drink, but then again, maybe that's not the intent, but it's an idea.

Posted by: Michael - 9/7/2010 10:15:09 AM
There are restrooms inside the El Cortez. And please don't make it a bar. They have a great beer selection as is and promoting it more as a bar would just overcrowd the place and make it harder to get what people are going there for: pizza. My only suggestion is more toppings on the specialty pizzas. They sound amazing on paper but it's hard to identify (by taste and sight) what toppings are on there when eating it. This place is great and has great pizza so go there.

Posted by: Justin - 9/8/2010 3:11:05 PM
Okay, I finally tried them the other night and have to say they get only 2.5 stars for me, at least based on my initial visit. Walked up to the counter and ordered, was told 15 minutes, returned 20 minutes later only to wait another 5-7 minutes for my order. The crust was bland. Nice texture, but ZERO flavor. The rest of the pizza was fairly good and seemed fresh, but the sauce wasn't zesty enough for me. I'll give them another shot, but I'm not sure this place will become a staple pizza place for me. I still prefer Grimaldi's @ Legends or Nu Yalk Pizza as far as thin crust pizza goes. For thicker crust pizza, I like Blind Onion (they really need to open a downtown Reno location IMO).

Posted by: Monica - 9/9/2010 12:20:34 PM
Yikes Justin I completely disagree. I ate there for the first time yesterday and loved their pizza. The slices were huge. My and my friends had our slices of pizza in about ten minutes. The Blind Onion did have a location in the Mizpah but was plagued by bad luck so bizarre it could have been a movie, including a flood, a fire, a break-in and ultimately another fire, the one that burned the Mizpah down.

Posted by: Letticia - 9/15/2010 8:35:17 AM
I love how this place is all alternative and stuff. All the employees have tattoos and look like they walked out of the mod squad. It's like Hot Topic meets the best pizza place in New York City. The sauce is not overpowering, or goopy or messy. The crust is crisp with a nice snap. The meats are tasty, I don't know where they get their sausage but yum.

Posted by: William - 9/15/2010 9:16:06 AM
My daughter wrote the above comment, so if it sounds like it was written by a child, it was. I am teaching her to praise food establishments she likes by publicly commending them. The give credit where credit is due lesson. We live close to downtown and enjoy reading your site together. Keep up the good work.

Posted by: Lazlo - 9/27/2010 2:45:30 PM
In my early 20's, I traveled extensively... and not just in the states. I've had ethnic versions of pizza in places like China, Greece, Denmark and Russia. I've eaten the "best" pizza in NY, at places like Ray's and John's. This having been said, Pie Face can compete with them all... across the globe, their inventiveness, enthusiasm and ingredients put their pies in the world's top 10. If you want a greezy-cheezy pepperoni slice, you can get that anywhere... but a deep fried slice with chicken and jelly?... What?!! Or a breakfast slice with proscuitto, asparagus and a fried egg... all covered in a lemony hollandaise? Come on... this place is beyond the ordinary pizza joint. Pizza is dead... long live Pie Face!