- A sign is up for the new Italian restaurant where Amendment 21 formerly was. "Scampi." 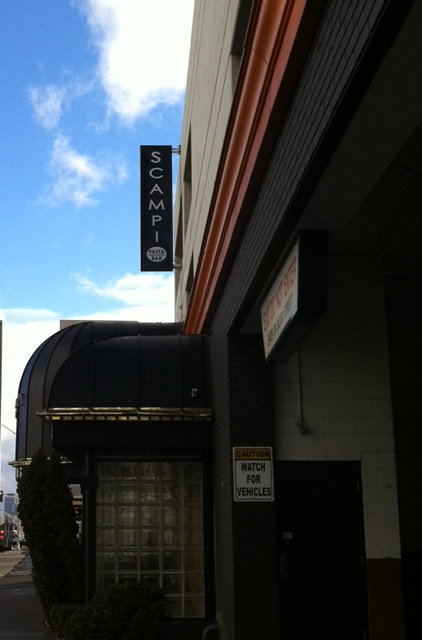 - TWO bakeries are now in the build-out process downtown, Sweet Treats by Kyle, which I wrote about for my upcoming February column of Reno-Tahoe Tonight, and then the Rounds bakery, specializing in bagels and other goodies. Sweet Treats by Kyle is going in where Paisan's Old World Deli formerly was, and Rounds bakery is going in at the corner of Court and Sierra, next to Bumblebee Blooms.

- The Aces - Entering their fourth season of Triple-A baseball in 2012 - will play host to the multi-day all-star celebration in July, 2013.  The special announcement was made this morning by Reno Aces Managing Partner Stuart Katzoff, Pacific Coast League President Branch Rickey, International League President Randy Mobley, Reno Mayor Bob Cashell and Reno Sparks Convention and Visitors Authority President & CEO Chris Baum. The annual Triple-A Home Run Derby is set for Monday, July 8, 2013 and the nationally-televised 26th annual Triple-A All-Star Game will take place on Wednesday, July 10, 2013. In addition to those two landmark events, the all-star celebration will include several days of unique entertainment for fans of all ages that will showcase the Northern Nevada region, including a fan fest that will feature interactive games, displays, autograph signings and historical memorabilia.

- University of Nevada Reno Art Gallery - The University of Nevada, Reno is interested in leasing space at West Street Market to display art and help establish a more visible connection between the University's art department and the community. The citicenter site was another location the university was eyeing, but instead prefers West Street Market. The lease would be at a potential loss to the city, as they are seeking $2.00 per square foot lease rates for the space.
Proposed Lease Terms:
Lease of West Street Market Space D1 also known as Building 144 (Approximately 890 square feet).
Tenant Lease Rate of $1 per year.
Tenant to pay the current monthly West Street Market CAM charge of $.60 per square foot ($534.00).
Lease term beginning as soon as possible, extending for three years. Upon expiration of the original lease term, tenant will have three (3) one (1) year options, not to extend beyond the Agency Master Lease expiration date.
Tenant to incur all improvement costs with the space including mechanical and HVAC.
Tenant to conform to all existing West Street Market rules and regulations in addition to Public Works / Parks Recreation and Community Services procedures for property management and special events.
The art gallery will be a nice complement to Bowl, Z-Pies, West Street Wine Bar and Se7en, and gives tourists and residents an additional activity downtown.

- Presentation on historic Wells Avenue - January 25 at 7 pm. West of Wells residents Barrie Schuster and Emily Rogers will give a presentation titled The Evolution of Reno's Historic Wells Avenue Neighborhood.  This event will take place at Mount Rose School on Lander Street and is sponsored by the Historic Reno Preservation Society (HRPS).  It is free to members of HRPS but you won't be turned away if you're not a member. Barrie and Emily will present historic and current photos of the neighborhood and discuss it's unique evolution within the City of Reno - from it's beginnings over 100 years ago to where the neighborhood is headed today. http://www.historicreno.org/