1/14/09 - SK BASEBALL PRESENTS PHASE 2 PLANS TO COUNCIL, ASKS FOR ASSISTANCE - Stuart Katzoff and his son went before the city council today to present their plans for Phase 2 of the Reno Aces ballpark, and ask the city council to consider assisting them in making phase 2 happen more rapidly by guaranteeing more sales tax revenue.
Stuart started to speak, and was abruptly cut off by Mayor Cashell who simply and pointedly asked "Let me ask you one question, are you gonna finish the baseball stadium?" That prompted Katzoff to dispel rumors and media reports that this has to do with the actual ballpark itself. That deal is done, the stadium is being built, and no additional money is being asked for that.
The developers want to add 64,000 s.f. of restaurant/night club space and an elevated plaza that connects to the baseball stadium. Citing rising construction costs and a stalled credit market, Katzofff asked the City Council to ponder assisting them with this portion of the project by guaranteeing more property tax revenue from the new development once built. Their hope is to build entertainment plaza in front of entrance to stadium, 3 restaurants, 2 of which would enter directly into stadium. There is also an elevated plaza accessible by escalator which will connect the venues together on an upper level as well and overlook into the baseball park. IMO, the addition of this as pictured below adds a much needed dimension to the ballpark that makes it more appealing for both ball games and additional off-season events and concerts.
Stadium seating arrives February 2nd. Click picture below to see full plan. 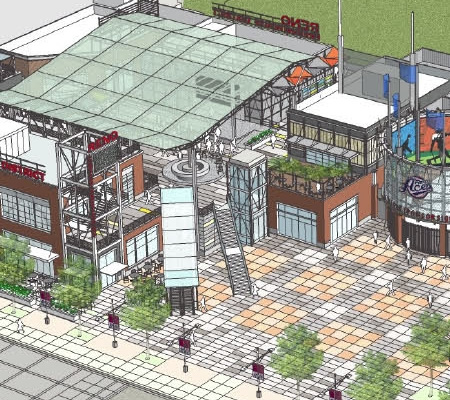 1/14/09 - SK BASEBALL RESPONDS TO MEDIA REPORTS - Their press release - "SK Baseball is currently working with Reno City Council to seek assistance in financing the much-anticipated downtown entertainment district, which will include three restaurants, three nightclubs and an outdoor events plaza in front of the stadium. The discussions with City Council are not related to the epicenter of the project, a state-of-the-art ballpark, because finances are already secure for the stadium, and the ballpark will be ready for Triple-A Baseball on its scheduled opening date of April 17.Given the existing credit and overall economic climate in the country, financing is not available through traditional means. Thus, SK Baseball is asking the City to support its efforts to ensure the entertainment district is opened efficiently and to the highest quality.


1/13/09 - SK BASEBALL TO FACE COUNCIL - First, note that for those of you who watch online or on cable or plan on attending tomorrow City Council Meeting, the redevelopment agency portion of the meeting has been moved to 10 a.m. Let's take a look at Item B.5 - B.5 Staff Report: Discussion, direction and approval of possible agreements between the City of Reno Redevelopment Agency, SK Baseball, LLC, and Nevada Land, LLC, regarding the development of the AAA Baseball Stadium, to allow for an increase to the Payment Agreement Tax Increment Payment in the amount of Five Hundred Thousand Dollars ($500,000) per year, with a minimum guarantee from the Redevelopment Agency of One Million Dollars ($1,000,000). RGJ is reporting that this is for the expanded entertainment buildings which includes 3 restaurants, 3 night clubs and an entertainment plaza. So what are your thoughts on this?