Here’s the ultimate definitive post on construction on South and North Virginia Streets, including what has happened thus far, what’s about to happen, renderings of chosen artwork to go in, and construction progress pics in the gallery below.

I get a lot of comments through Downtownmakeover and see a lot of comments online regarding the re-construction of South Virginia Street and usually they’re from a negative perspective. Comments like ‘This shouldn’t take this long’ and ‘my grandfather could build a street faster than these guys’ and the like.

So let’s take a look at what has been done thus far, to get a better understanding of the depth of construction involved with completely replacing not only a street, but also the infrastructure supporting that street, and the sidewalks. A LOT of work has gone into this project in a relatively short period of time.

In August of 2018, utility relocation work began along South Virginia Street. South Virginia Street interestingly, used to be NDOT’s responsibility, but at some point in the past, not sure when, that was transferred over to the City of Reno. As part of the utility relocation, new AT&T fiber-optic was installed, while at the same time replacing old terra-cotta and iron piping for communication infrastructure with improved PVC piping. Storm drain improvements were completed to upgrade aged infrastructure as well as to accommodate the new roadway configuration/wider sidewalks. .

Also as part of the utility work, conduits were installed for SmartCity infrastructure. This high tech form of signal communication is cutting edge.  A smart traffic system helped Stockholm cut gridlock by 20 per cent, reduce emissions by 12 per cent and increase public transportation use dramatically. In London, a congestion management system lowered traffic volume to the mid-1980s levels. The system in Singapore can predict traffic speeds with nearly 90 per cent accuracy. With future enhancements, the system will help predict—rather than merely monitor—other traffic conditions as well. The installation of this system along South Virginia Street is hopefully just the beginning of Reno’s adoption of this amazing technology to help reduce wait times in traffic.  Although Intelligent Transport Systems (ITS) have been around for a long time, the new generation of solutions offer features like traffic prediction, analytics and decision support, traveler information, advisory services, ticketing and fare collection. Innovative tools such as roadside sensors, radio frequency tags and global positioning systems also help monitor and manage transport more effectively.

All told, $13 million worth of core improvements were installed during this phase. The project as whole is quite complex, with a high risk factor due to the proximity of businesses, moving traffic, and pedestrians.

Phasing was initiated for the above-ground work that followed the utility phase. The first sections were side streets that were reconstructed and South Virginia from Plumb to Mt Rose. Over the mild winter, a lot of concrete work has been done from Mt Rose to Liberty. We’re now 8 months away from both the South Virginia and North Virginia portions being completely done. Yay!

All of south of Mt. Rose to Plumb is already paved and striped - including all side streets included in the project.

Moving northward – road work will soon start on the west side between Center and Mt Rose – which includes removing the old road, preparing it to be paved, then paved. Then the east side will go through the same process. The final layer of pavement goes on both sides in early summer.

Then work begins north of Center Street on replacing the street and sidewalks, while also finishing work with trees and lights and new bus stations along South Virginia Street.

For those wondering about the lighting situation, the old ‘cobra-head’ super tall lights as well as the ‘candy-cane’ lighting installed just north of Mt. Rose Street will be removed once the new lighting has been installed and up and running along the southern corridor of Midtown. This will prevent any ‘dark spots’ from happening by ensuring the new lighting is functional prior to removing the two old styles of lighting.

Trees will be installed in the southern portion of the project within the next month, weather depending. The trees will have their own built-in watering systems.

The patches of black asphalt you might have noticed will be filled in with matching concrete to match the rest of the sidewalks, once the old lighting is removed.

Three new RAPID stations are also being constructed in MidTown, each with their own unique style, and will be lit up at night.

During construction, there are two temporary parking lots available you might not be aware of, one at Tahoe and Forest containing 44 spots, and one at Mary and Haskell with 25 spots. Please, please utilize these temporary parking spots and continue to frequent Midtown businesses during construction. I know it’s almost a knee-jerk response to avoid an area under construction, but these businesses really need your help to survive this process. There’s more than enough parking to accommodate you in these temporary lots, and you may also find some street parking available, though that tends to change depending on what’s being worked on that day. Many of these business owners are friends of mine. So please take the time to frequent your fave midtown business despite the construction going on.

This area will look absolutely stunning when completed. When I was walking around taking construction photos last week, I saw families walking side-by-side on the newly widened sidewalks, something that wasn’t possible before. It convinced me that the inconvenience will be worth it in the end when we have a new 1.2 mile long walkable corridor with wider sidewalks, trees, landscaping, and other new elements to make this area more inviting and walkable, especially during public events like the Midtown Art Walk.

Below is a rendering of the new art going in on the roundabout that’s almost completed at Mary and Virginia Street. 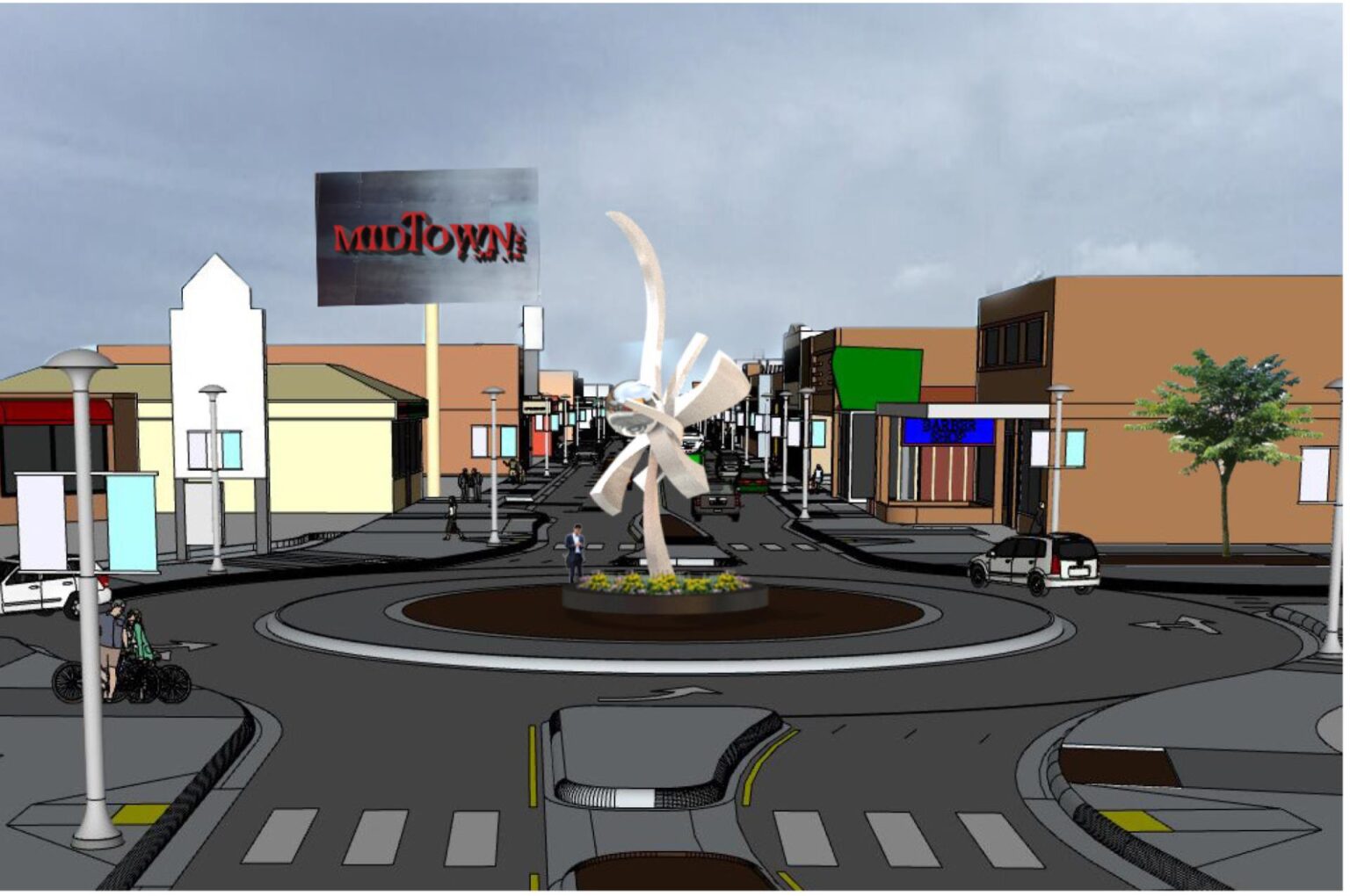 The plan for North Virginia Street is to extend the existing RAPID service up to Lawlor Events Center, where a big roundabout will be installed on Virginia Street just north of 15th Street, about 300 yards north, where the entrance to the parking garage on the east side is. A new pair of RAPID stations (northbound and southbound) will be constructed between 8th and 9th Streets, and another pair of stations near College Drive and one stop near Lawlor – which will be the northern limit of the RAPID service.

The buses will circle around the roundabout then head back down Virginia Street. Below is a rendering where you can partially see the roundabout and the Lawlor station. 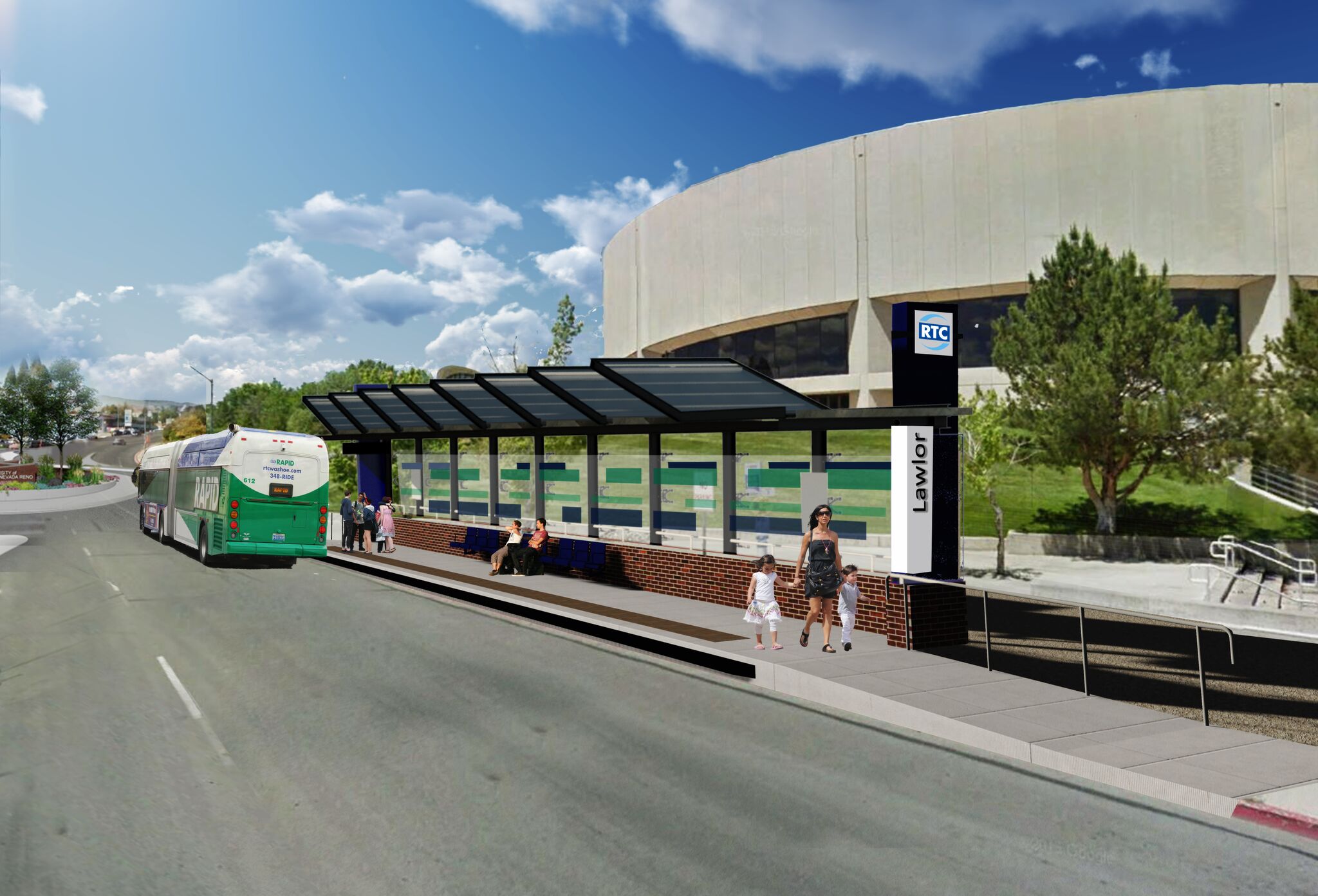 The four-lane road will be reduced to two lanes between 9th and 15th Street, with one traffic lane in each direction, a dedicated bus-lane in each direction, and a northbound bike lane. The southbound bus lane will also serve as a shared bike lane, so only buses and bikes will be able to use that lane. Between 8th and 9th Street, the street will be widened additionally for a main transit stop. Five properties on 8th street block on east side are scheduled to be demolished to accommodate this transit stop - toward end of month depending on how asbestos abatement goes, the first building will be demolished.

Work on the roundabout by Lawlor Events Center (partially pictured below) will begin April 1st - all the work on the UNR side will start shortly thereafter, go through summer and wrap up by fall semester. Also over the summer, many ADA improvements will be made to this stretch of North Virginia Street.

Both Midtown and university strip will be completed Fall of this year. Yay!

RTC is holding a community event this Friday morning, March 6th, Cookies with the Construction Team on Friday at Insomnia Cookies from 9:30 a.m. - 11:30 a.m. Here’s more information on that meeting should you choose to get involved or have any questions. https://www.rtcwashoe.com/news/virginia-street-project-construction-to-begin-near-the-university-of-nevada-reno/

And finally, RTC wants to hear from you regarding both portions of the project. Here’s a link to a PDF that contains contact info, project team info, how to sign up for text alerts, stakeholder meetings and more. If you have any questions, whether you’re a resident, business, stakeholder, or just curious, please reach out to them. They’re being as transparent and available as possible during the project.

Check out photos of the progress below in my gallery!