Renderings for 700 Riverside Drive, and Clearing Up Misconceptions

I’m no stranger to infill development.

I was already settled in my house when new, three-story townhouses were built across the street on the 400-block of Holcomb Avenue.

I also witnessed the construction of Midtown Lofts, completed in 2017. Its mammoth three-story lofts are just down the alley from me, and combined with the townhomes on Holcomb, block my view of downtown completely.

Even still, I am a fan of both of these projects, because I believe strongly in infill development, and neither of these developments, despite destroying my downtown view, resulted in negative impacts in the neighborhood nor resulted in the demolition of structures of historic significance.

Infill and adaptive reuse are big with me, and the reasons I’m a big fan of Urban Lion and their projects.

Each of their past projects transformed their respective neighborhoods for the better.

The instant vibe change of Center + Pine is a prime example.

Center + Pine was purchased in April ’16, in partnership with Desert Winds Homes, and is a collection of three individually unique properties. A 22,000 square foot abandoned motel (Center Street Lodge) that was converted into 24 brand new apartments with Pine State Biscuits and a barber shop calling the first floor home. The old Pine Street Liquor Store was remodeled and re-envisioned, now occupied by Sizzle Pie. A long-abandoned 2,000 square foot retail store was repurposed into a coffee shop.

They also have two additional adaptive reuse projects, 727 Riverside Drive and Urban@University. Both of these projects proved to be successful retail hubs for the surrounding neighborhoods.

So when 700 Riverside Drive emerged as their newest project, which I reported on the permits here, I didn’t think too much of it other than ‘Cool, another infill project from a developer I like.’

Much like High Street Townhomes and Midtown Lofts, the project is being built on a former parking lot. No homes are being demolished for the project, a concept I’m a big fan of, especially when it comes to older homes.

This project first attracted some controversy when people noticed large trees being removed. This is when most of the public (or those who don’t follow my posts lol)  first learned of the revised project for this lot. Reno’s queen of trees-and-everything-green, Naomi Duerr, who I adore, stepped in and worked with Urban Lion to save eight of the 12 trees, including six old elm trees on Jones Street.

The previous proposed project for this lot was Ponte Vecchio.

A portion of Washington Street was abandoned for that project over a decade ago, and unbeknownst to many, remained private property even when the Ponte Vecchio plans fell through with the real estate market crash.

Roadway abandonment runs with the life of a property, and doesn’t go away just because a project wasn’t developed. This is evident with the diagonal portion of `1st Street that connected to 2nd Street which was abandoned for the Waterfront Project, a proposed high rise residential district that never materialized. The street has remained abandoned and overridden with weed trees. The difference with the Washington Street abandonment is that the street never technically closed.

Beyond the trees and street abandonment, other issues raised about the project include its scale and elimination of a parking lot for adjoining businesses. Questions and concerns have been rasied about its compability with the neighborhood, thus, I decided to reach out to one of the developers at Urban Lion, Paddy Egan, to respond to some of the issues being raised, and to get renderings of the project so we can actually see what is being built.

So first, let’s check out what the project will look like: 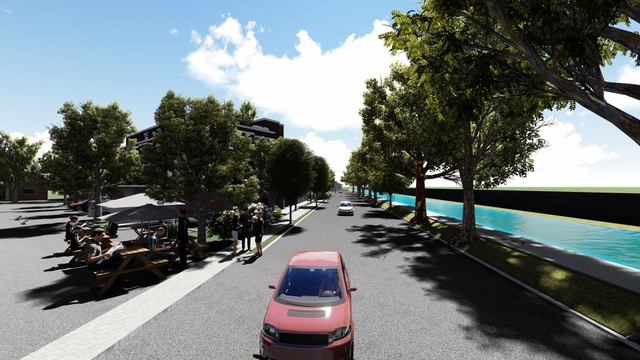 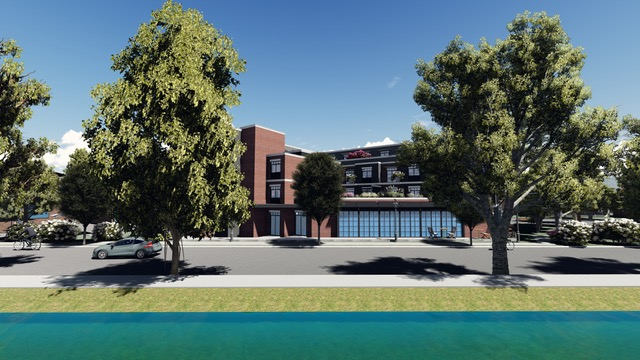 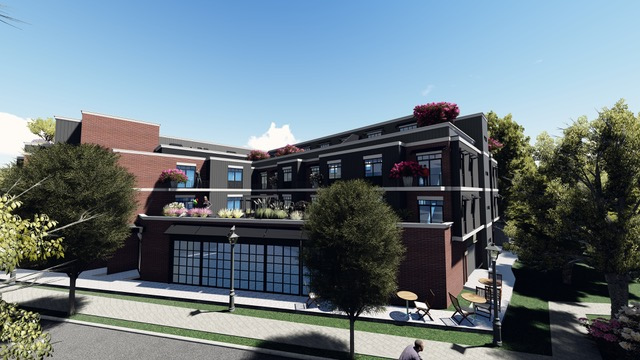 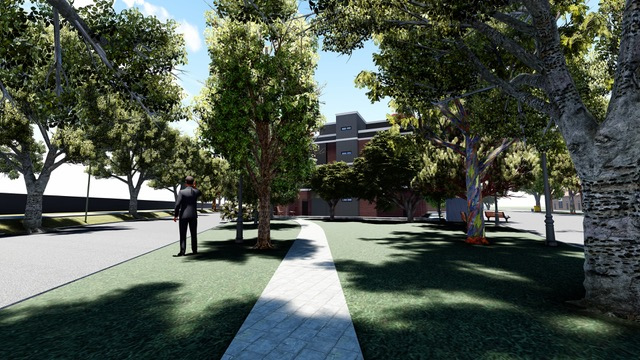 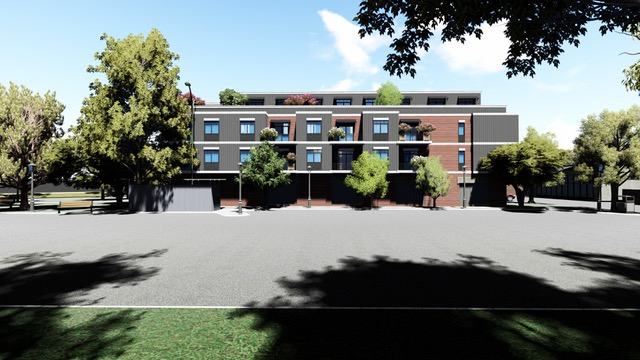 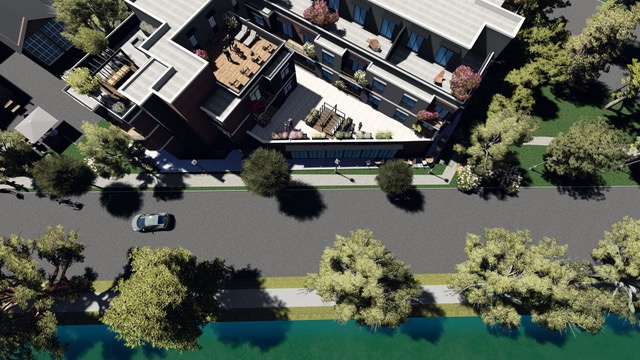 From the outside of the proposed building, the average building height is only approximately 36’ high.

Because of the stepping back of the height, I think this project scales much nicer with the neighborhood than its proposed processor, Ponte Vecchio. I don’t see it as a behemoth building that’s so out of scale with the neighborhood that it will destroy it. No homes were demolished for this project, Washington Street was already abandoned for a prior project, and most of the trees are being saved.

Urban Lion Principal Paddy Egan explained that the building’s stepped-back design with warm wood, stone and brick textures and its multiple terraces filled with plants and living spaces feel more appropriate for the neighborhood than an intense, aggressive cube that converts every square inch into space for rent.

But he acknowledges that the city’s plans for the neighborhood have called for more aggressive residential density than the design that Urban Lion believes to be appropriate for the site.

The city’s new zoning code, which will take full effect in early 2022, takes the same approach as Urban Lion, calling for less density than the old code. Urban Lion began working with city staff two years ago, well before the creation of the revised code that takes effect next year.

“I grew up in the Riverside neighborhood, and my business partner Joe Udvare grew up in Reno as well,” Egan says. “We’ve watched the neighborhood flower since we purchased run-down buildings and weed-filled lots a decade ago. We’ve been proud to redevelop spaces where locally owned businesses such as Hub Coffee Roasters can thrive. We want to continue our contributions to a vibrant Powning District.”

Speaking of trees, Urban Lion assured me MORE trees will exist than currently exist on the property as a result of this development. Their roof decks will also offer additional space for small trees and a partial “green” roof concept as shown in the renderings. According to developer Paddy Egan, “It is true that we will have to remove a few trees. Not all of them. However, we will be planting more than 3 times the amount of any that are removed.”

He says the company is strongly committed to saving trees at the new project. Only the trees that are directly in the footprint of the new building will be removed, others will be saved so long as they don’t create a hazard to the public, and the company will plant three trees for every tree that must be removed.

In addition, Egan says, the landscaped terraces will provide even more greenery.

Lunsford Park won’t be changed as a result of the project.

The project will have dedicated on-site parking for the commercial tenants along the west side of the new building. Developer Paddy Egan told me when their plans were first approved, they also had an additional 13 private parking diagonal spots along Jones street for commercial tenants. However, after first receiving approval for this on 11/20/20, the city then rescinded approval on the diagonal parking. The project then went through 6 rounds of plan checks with the city. According to Urban Lion, they are “parked more than required by code.”